Photos from Whiskers in Wonderland 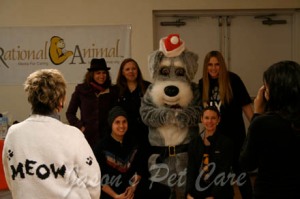 These pictures come a little late, as Jason’s been busy trekking dogs through the snow in Queens and I’ve been up north doing the family thing for the holidays.  But without further ado, here are a few photos Jason was able to snap off while we volunteered at the Whiskers in Wonderland event, hosted by the Mayor’s Alliance for NYC’s Animals.  We spent a little time helping Sean Casey Animal Rescue get set up, which is where I met Butterfly.  I don’t see her listed on the adoption page any more, so I’m going to assume she found her forever home. Congratulations to her new owners, that cat was a gem!  I also worked a bit with Buffy, a sweet black kitty with funny little fangs-don’t let her goofy pictures fool you, she looks much more like a cat than a bat!

Although the event was primarily for small pet adoptions, a few select pooches were invited to make an appearance. I had the pleasure of walking Miss Co Co, and Jason had this handsome guy named Bear.  It was a fun and rewarding day, with lots of folks leaving the building with pet carriers.

This entry was posted in By Janine. Bookmark the permalink.