This has been a difficult year for us in terms of pet loss. In March we lost our beloved Chester, and in June our boys Vikter and Baboo were ripped out of our lives by an apartment fire. The following is a memorial I wrote for a blessing of the animals, performed by Yogi Akal.

“The day after I graduated from college back in 2003 I made my parents take me to the Yonkers Humane Society, where I intended to find myself a male tabby. I had even picked out a name – Chester.

When I got to the shelter, however, I was taken by a stunning female tuxedo, the happiest cat I have ever seen in a cage. She purred at me when I looked at her, she purred when we put her in the box to come home, and she purred throughout the bath we gave her after she pooped all over herself on the ride home (she never cared for travel). When Chester was two years old she escaped from the apartment I was living in at the time, and wound up lost in a Brooklyn alley for about fifteen hours. The determination I felt when I searched for her is as yet unmatched by any other sense of motivation I have ever felt. I ultimately found her hiding beneath a broken glass shower door with a condom stuck to her foot. When I brought her inside and gave her a bath, she allowed me to run her under the faucet like a rag doll and purred as she did that first day together. Chester was one of the happiest cats I have ever known and one of the greatest loves of my life.

In 2008 Chester became a sister when I adopted Vikter from a friend. A rambunctious young Turkish Van, Vikter gave Chester a run for her money but they soon became inseparable. Within months it became common to find Chester and Vikter wrapped around each other, grooming each other and playing. 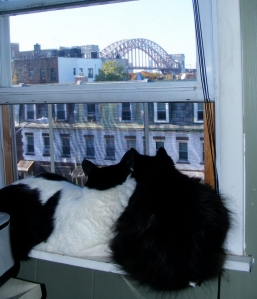 Vikter was even in the habit of begging for food, then turning away so his sister could eat once the payload was delivered to their dishes. It turns out chivalry is not unique to humans. Vikter also entered my life at the same time as my fiancee, Jason. They became best friends and would often have conversations, Jason asking “What is it boy?” or “Do you like your new toy?” “Do you want more food?” with Vikter replying through an assortment of vocalizations.

Earlier this year, in January, Jason and I were walking home from the train when we heard the unmistakeable sound of a cat in need. It was one of the only snowy nights of the year, a wet, slushy mess no cat – indoor or out – would want to be stuck in. The yowling we heard came from a Siamese cowering beneath a parked car. With the help of another man on the street who happened to have just bought cat food we were able to lure him out. From there he willingly followed us home like a little dog. And that is how Baboo entered the picture. 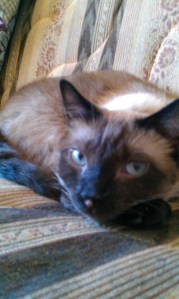 For the first few weeks Baboo was with us he lived in the bathroom so we could have bloodwork done and make sure he posed no health risks to the other cats. We were stunned that no one came forward to claim him. He was decidedly ours. Vikter showed an immediate interest, chatting with Baboo through the bathroom door and pawing at him through the crack. Chester, on the other hand, seemed non-plussed. When we integrated them and Chester continued to act aloof, we assumed it was a territory issue. Unfortunately in the week and a half that followed we came to notice she was losing weight and becoming increasingly despondent. Chester’s issues were not behavioral or emotional – she was dying of stomach cancer. The damage to her intestines was so advanced that the only humane decision was to put her to rest. Although painful, it was not nearly as upsetting as the day she got lost. We shared nine years of love, when we could have only shared two if I hadn’t been able to find her that day.

Vikter was visibly depressed by the loss of his sister, but Baboo provided comfort for him, and to us as well. Baboo helped us laugh and saw us all through our loss. Sadly, on June 3rd, almost exactly three months after losing Chester, we lost both of our boys to an apartment fire.  We take solace in knowing they died quickly of smoke inhalation, and were found intact and unburned. Although devastated to have lost all of our “kids” in a matter of months, we take comfort knowing that Chester and Vikter are together again, and that Baboo had almost five good months of love and affection that he may not have otherwise received.”

This entry was posted in By Janine and tagged Baboo, chester, grievance, memorial, pet loss, vikter. Bookmark the permalink.

One response to “An Overdue Memorial”