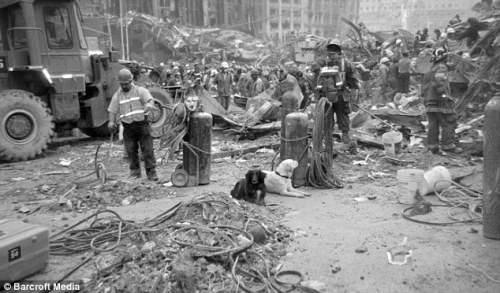 Today, on the tenth anniversary of the attacks on the World Trade Center, we wanted to highlight the dogs that came to the aide of the rescue workers that put their lives on the line working at Ground Zero. From the search and rescue dogs that worked in the rubble and debris to the therapy dogs that have provided solace to the survivors and their families, here are just some of the ways these dogs are being celebrated around the web:

Retrieved  The soon-to-be-published book of portraiture by photographer Charlotte Dumas honors the search and rescue dogs that worked tirelessly alongside the emergency response personnel and courageous volunteers in the aftermath of the attacks. The portraits capture the remaining twelve dogs, out of the nearly one hundred that served at the trade center, who are now living out their twilight years.

Retrieved will be released on October 31, 2011 and is available for pre-order through Amazon and Barnes and Noble.

Saved  This Animal Planet special series highlights the dogs that provided solace to two families who experienced loss and trauma, and the value of the human-animal bond that helped them recover. Check your local listings for show times.

Dog Heroes of 9/11  This website showcases a beautiful slide show of the rescue dogs and their humans in action.

The Pentagon’s Heroic Rescue Dogs This pictorial, which dates back to 2001, honors the rescue dogs that aided the search and rescue efforts at the Pentagon.

Therapy Dogs International  The TDI page features a touching tribute to the healing power of therapy pets in the ten years that have passed.